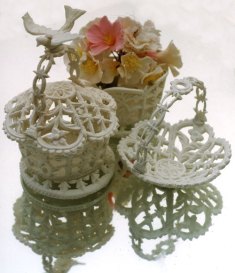 Last weekend (4/12-13), I was a participant in a two-part symposium held in conjunction with an exhibition at Harvard University’s Busch-Reisinger Museum called “A Taste of Power: 18th-Century German Porcelain for the Table“. The second symposium day, entitled “Extravagance and Drama“, entailed demonstrations and image presentations by me and two other artists, Gala Sorkina and Nicole Peters, at Harvard’s ceramics studio. “Tables of Content” was the title for the first day of symposium lectures, and while I think we were great, that day’s lectures were superb.

Two of my three favorites were about the transition of tableware vessels and sculptures made of sugar and silver into porcelain. This huge part of history was completely new to me. Maureen Cassidy-Geiger of the Arnhold and Frick Collections gave a wonderful lecture called “Sugar and Silver into Porcelain: The Conditorei and Court Dining in Dresden under Augustus III“. (She pointed out that since sugar can’t last and silver could be melted down, the porcelain vessels were often all that remained of this stage of history.) 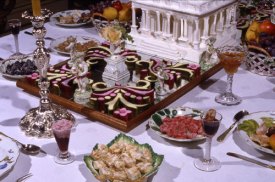 These first two images though come from Ivan Day who gave a lecture called “The Edible Edifice: Sculpture for the 18th-Century Dessert Table“. Mr. Day is an expert in the field of British and European culinary history, and not only does he know it, he makes it! He made the baskets, bird and flowers above from sugar “like in olden times”, shaping the sugar paste like clay. Though he explained to me that the sugar is actually easier to use than porcelain. (I’m still absorbing that fact.) Ivan also made the filigree, brightly colored centerpiece above and white, columned building featured on this table, from sugar. Amazing. I took lots of notes, and am excited for this new discovery of these old forms and shapes. (I was very flattered and honored that he came to watch us demonstrate the next day.)

The third of my favorites was by Valerie Steele of The Museum at the Fashion Institute of Technology (F.I.T.). She presented images and ideas from an exhibit she curated last year called “Fashioning Luxury“. She gave a wonderful overview of the history of haute couture, gender and class in clothing, and explanations of curious phrases like “popu-lux”, “mass-tige” and “stealth luxury”. Among the myriad of books she has written, one is on corsets (The Corset: A Cultural History), she was described in The Washington Post as one of “fashion’s brainiest women”, and on her blog, she has an interview with John Galliano. Need I say more?

My Online Shop is stocked with new work ready to ship! Thank you as always for your continued support of handmade & joyful from my studio.

Potter of the Month Interview