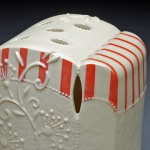 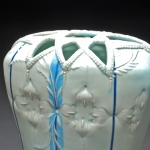 A couple weeks ago, I was in my studio pondering, and had a ‘piercing epiphany.’ I haven’t had time to do more than draw just yet, but am excited about expanding my use of piercing/reticulation/cut-outs (as pictured above) on some new and existing forms as a way to play with line, light and shadow, and form through articulated pattern.

The development of new forms paired with new surfaces is a given goal, but some days I feel more inspired (a.k.a. internally pressured) to bring that back-burnered desire to the fore. That drive usually sends me to my books on silver, my favored springboard for new forms. (It is perhaps odd to be influenced by centuries-old objects with functions so specific, many are now obsolete, but most any form for me can become an idea for a vase, which can then lead to many more ideas.)

So I was down in my studio thinking, but my books were upstairs and are worn from years of gleaning, and my computer was downstairs with me and filled with new, enticing images I’ve been bookmarking, so of course, I opened my computer. I visited my own Pinterest boards where I ‘pin’ both objects I enjoy (favorites) and objects that inspire my forms and surfaces (influence). A common thread popped out to me from my Form & Pattern, Oldies But Goodies, Ceramics: Vintage/Historical, and Ceramics: Studio Potters/Artists boards, and sent me to my sketchbook to draw: Piercing.

Pierced work was very popular in both silver and pottery in the 18th century (particularly the latter half) in England and Europe. I haven’t found specific information claiming so, but piercing seems a wonderful blend of form and function: the cut-outs allow air circulation (for food service and storage) while both visually defining form and lightening materials (silver, clay, wood) that can otherwise appear a bit more heavy or dense. (I sometimes envy glass’ ability to be simultaneously solid and transparent.) I also enjoy pierced elements in architecture, furniture, clothing, and many more mediums.

So, I’ve yet to get started on my own cut-outs, but have done some drawings, am very excited about minimal and maximal piercing (particularly for fruit bowls and baskets), and collected some of my favorite basket-y forms by fellow studio potters mixed in with ones from the 18th c. for you below. Enjoy, check out my new Pinterest board Cut-out & Cagey, and stay tuned for some pierced pots from my own studio!

Here are some of my faves from our wicked awesome autumn jaunt to the Museum of Fine Arts, Boston. The MFA recently opened a new wing for arts from the Americas, so many of my pix are from there, but as usual, what I’m drawn to are diverse materials, time periods, shapes, and styles, which will filter into my work in various ways over time. Enjoy!, and see more influence, pictorial posts here. (Hover your cursor over any pic, or click each, for more info.) 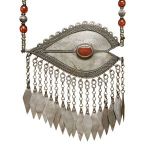 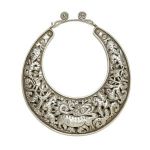 The wearable objects above and the portraits of their wearers are beautiful to me.

Several of my past sketch/idea books have pictures and xeroxes from museum exhibitions and books about traditional jewelry, beads and adornment.  I enjoy the patterns, shapes, forms, ornamentation, colors, intricacy, layering and elegance, as well as the symbolism and meaning of jewelry from different time periods and cultures.  Elements of adornment have influenced my work in various ways over the years.  My pots can look “jeweled” or like over-sized jewelry components I think.  The shape of a traditional Ga’u amulet lends itself to the idea and drawing of a large covered jar, or the negative shape created by a Victorian necklace becomes the lip of a pot.

I thought I would include some of my favorite contemporary, handmade necklaces too. From left to right: Funky Felt Necklace by Rose Tutu in Montreal; Textil Art Necklace by Maria Cavallero in Argentina; Precious Zip It Necklace by Londi Creations in France; and Wood Resin Cluster Necklace* by Modica Design in Oregon. (*Happily, I received this necklace as a gift from my husband.)

My Online Shop is stocked with new work ready to ship, and now online workshops too! Sign up for announcements about what's new. Thank you as always for your support of handmade & joyful from my studio.

Potter of the Month Interview